COVID-19 Update: A message from our CEO →

S/4HANA adoption grew to more than 8,300 customers – a 43% rise against previous year, according to SAP’s recent Q1 2018 results. It’s no secret that SAP has seen its share of teething problems since launching S/4HANA in 2015, reporting significantly lower uptake than initially forecast. 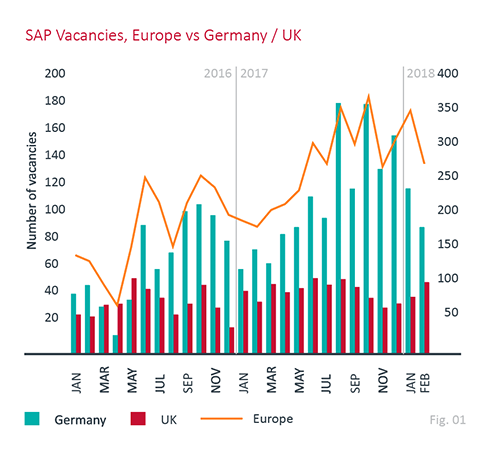 Despite SAP’s claims that S/4HANA is one of the fastest selling products ever, a high percentage of S4 licenses remained ‘shelf-ware’, awaiting implementation.

Now, early job indicators suggest that SAP customers across the EU are increasingly moving towards S/4. In SAP’s recent Q1 2018 statement, Bill McDermott said: “Even against the steepest comparisons, S/4HANA led us again to major market share gains for the company.” The Centiq report appears to confirm this, stating that 84% of SAP HANA migration projects in the next 12 months will be S/4HANA-related.

The one about Germany, the UK and Eastern Europe 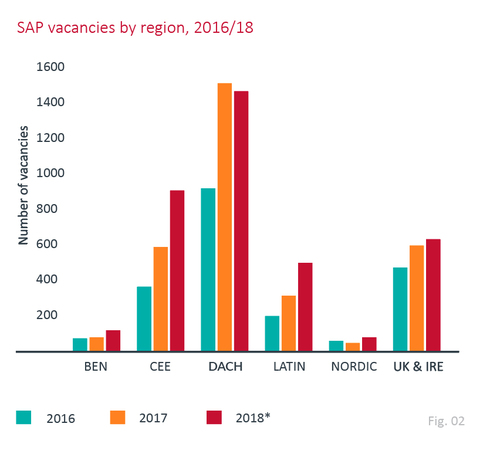 ​Germany, the home of SAP saw a surge in job activity in the second half of 2017, with August jobs up 84.4% against July and a high level maintained for the rest of the year.

The UK market by comparison only saw an 8.2% increase in activity between July and August.

If Germany is an accurate litmus test of SAP’s new products, should we expect a domino effect of increased activity elsewhere in the Eurozone if more businesses decide to migrate to S/4?

In contrast, job activity in Central & Eastern Europe (CEE) eclipsed UK activity by 42.5% for the year so far, which may be explained by companies doing more hiring for SAP offshore. If this trend remains consistent, these could be early indicators for increased activity in the CEE region over the long term. 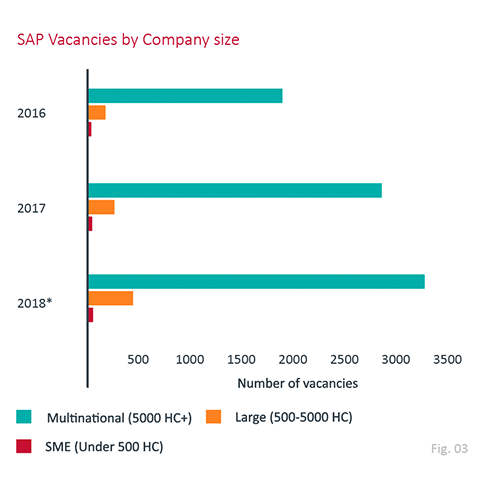 In sector terms, Technology, Media and Telecoms (TMT) has seen notable increases in job activity over the past two years, rising 72% between 2016 and 2017, and 34.9% for 2018 so far. Is the drive for supporting and implementing digital transformation plans across sectors giving rise to the demand for SAP hiring at technology companies?

According to Centiq’s ‘State of SAP HANA’ 2018 Report, published in February, media and telecommunication companies have benefited from faster business processes due to upgrading. 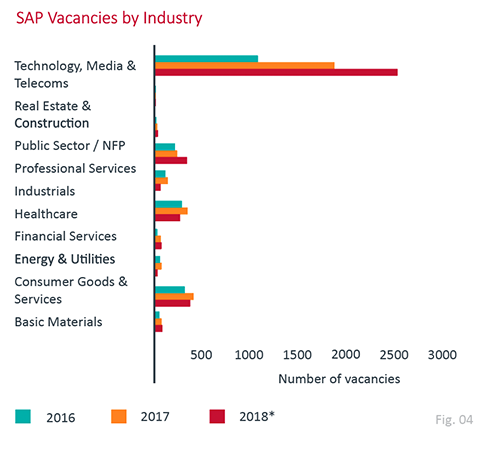 The Professional Services sector has also seen a notable change, rising 13.3% between 2016 and 2017, and 43.4% for 2018 so far. Deloitte announced plans to migrate to S/4 during 2017 – a good example of the solid business case CIO’s have been waiting for to justify the substantial cost of migrating to S/4.

Confirmation of S/4’s technical reliability over existing SAP ERP solutions is the other factor currently delaying migration. This could lead to a trend of larger consultancies updating their SAP capabilities.

The rise of the SAP consultant 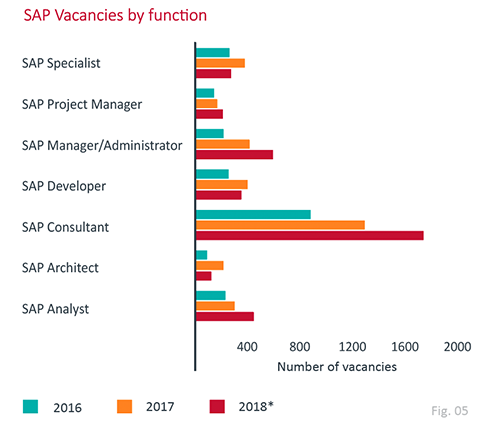 In relation to job functions across the SAP industry, the figures show a significant increase in jobs for SAP consultants over the past few years, with roles rising 45.8% between 2016 and 2017 and rising 34.8% in 2018 so far.

As more businesses across the Eurozone begin to update their SAP systems, is this increase in demand for SAP consultants specific to consultants with S/4 knowledge or does this trend simply indicate further demand for ECC projects? Time will tell. 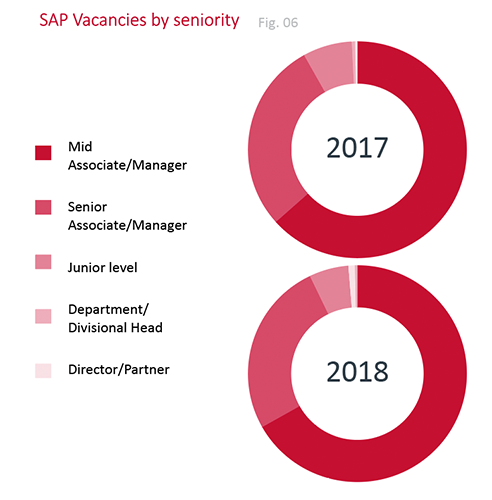 The demand for S/4HANA skills looks likely to continue to increase, with SAP consultants benefiting the most from this trend coupled with an increase for demand in mid-level SAP professionals.

Germany continues be a strong player in the Eurozone for hiring and early indicators point to growth in SAP skillset requirement across CEE.

To discuss these trends, find out more about how to make the most out of your S/4HANA skillset or talk SAP career or staffing requirements, get in touch with the RED team.

Questions to ask in an SAP contractor interview